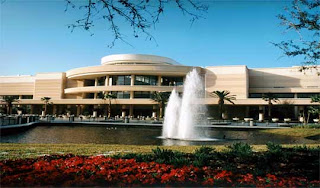 The (Southern Baptist) World has changed…

I have been glued to my computer screen all day today watching the live-stream of the 2010 Convention in Orlando, and I thought that I might post on some of what I have seen so far.

There were 10,994 messengers registered (I think I got that number correct, if not I am not off by much.) This number was well up from previous years, and is a good sign. I do not know yet, but it is my suspicion the increased numbers are due to many of the younger generation attending for the first time in many years.

The Great Commission Resurgence Taskforce Recommendation was approved by a majority of the messengers in Orlando. Not being there and no numbers given I do not know by how large of percent this passed. But pass it did! So bring on the naysayers…

First Round of voting on the next President of the SBC:

Wright and Traylor will advance to the second round of voting.

The low-point (and low blow) of today’s proceedings at the convention, was the address by outgoing Executive Committee President, Morris Chapman. Who last year used his time before the convention to bash Calvinism and this year used his time to bash the GCRTF recommendations. One good thing that Morris Chapman said and to which I gave a hearty amen (howbeit in my office) was when he said this would be his “Last Address to the Southern Baptist Convention.” Amen, and Amen!

Morris Chapman should be the poster boy for a campaign to limit the term of anyone serving as Executive Committee President to no more than 8 years.

Johnny Hunt, who very likely disagreed with Morris Chapman, commended him during a prayer for speaking his mind. I've heard it was a convention that expressed godly behavior, precisely because people respected people and disagreed with IDEAS.

You, sir, may want to consider following this principle. People, although you may disagree with them, are still PEOPLE. And while I disagree with Morris Chapman about many things, I still refuse to publicly bash him. I prefer to travel the high road and exchange ideas instead of personal criticisms.

By posting what you just posted, you have proven yourself to be no bigger than Morris Chapman.

How sad. And ironic.

"I prefer to travel the high road and exchange ideas instead of personal criticisms."

Laughing... this coming from someone who has just leveled a very personal criticism of me is just absurd. (I will not post the email you just sent to me... but I did read it)

Have a great day in the Lord...

Dear Greg: Your update was interesting. I have thought that the GCR might become the means to increase the centrifugal forces away from the cooperative program and reduce the centripetal forces of that financial method that has bound Southern Baptists together for so long and through so much. If such should be the case, we will see this great mission program and convention come unglued quicker than the Road Runner's beep beep. If so, it will acomplish the goal of some outside the convention who had long desired to see the biggest mission force in Protestantism destroyed. While we pray for and long for a restoration to a more faithful and biblical theological stance, we also want to see the power of a great financial program sustained, continuing the possibility of a truly great mission force.

The very spirit of the Great Commission Resurgence is “Cooperative Missions”. This can be seen by the desire of many in this movement, our new SBC President included, to give sacrificially to the cause of International missions by giving directly to the IMB and leading their churches to get directly involved in missions.

It’s all about fulfilling the Great Commission… at any cost!

I commented to you in private. You criticized Chapman's character publicly. I know it can be argued that Chapman has done things publicly that are controversial, but that gives you no right to be less than excellent in your public perspective/judgment of his character.

You have the tendency to automatically assume the worst of someone who disagrees with your theology and ecclesiology.

You, my dear brother, have a great day in the Lord as well.

Brother Marvin, I do not want to have prolonged debate over this… once again we simply do not agree.

Love you to Brother… Hope you have a good weekend and a great Sunday.