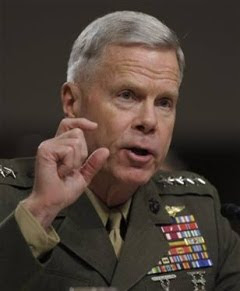 The first flush of speed-dialed and pre-composed e-mail reactions to the repeal of Don't Ask, Don't Tell came from gay clergy applauding the vote. Now, Sunday morning brings the conservative evangelical voices with dire predictions for its impact on military chaplains.

While some fret over the stress to those chaplains whose religion teaches homosexual behavior is unbiblical, others worry that members of our religiously diverse armed forces could be treated like a captive audience for evangelism.

The Alliance Defense Fund's Daniel Blomberg argues that by bowing to activists, the Senate is placing thereligious liberty of troops and chaplains in "unprecedented jeopardy.

... No Americans, and especially not our troops, should be forced to abandon their religious beliefs. We hope that our nation's leaders will work to ensure that none of our Soldiers, Sailors, Airmen, and Marines are ever made to choose between serving their country or obeying their God as result of this damaging policy decision.

A Pentagon study concluded that open service would not affect military readiness but it also included some concerns about military "prayerfulness." Some of the military's 3,000 chaplains voiced fears that they would not be able to preach the truth of a religious belief that homosexual behavior is unbiblical.

A large number of military chaplains (and their followers) believe that homosexuality is a sin and an abomination, and that they are required by God to condemn it as such.

Terry Mattingly, founder of the religion media critique site Get Religion, writes in October that thepotential chaplain problem wasn't being fully addressed in the media.

What happens if the conservatives are right and that any advocacy of traditional doctrines by chaplains is labeled "hate speech," with offenders either being punished or simply denied the ability to advance in rank? If you read the views of theological liberals, there will be no problems after repeal, unless there are problems. No one is talking about "hate speech," except for those who believe that conservatives are already guilty of "hate speech."

A few years ago a Military Chaplain shared his concern with me that in the near future it would be the Christians in the Military who would be ordered to “Don’t ask, Don’t Tell… Your Christian Values!”

At the time I did not take his prediction very serious… However, driving to work today I heard the Marine Commandant on the radio saying "the Marine Corps will step out smartly to faithfully implement this new policy. I, and the Sergeant Major of the Marine Corps, will personally lead this effort, thus ensuring the respect and dignity due all Marines." In other words… there will be “Zero Tolerance” for any Marine who does not fully accept Homosexuality as normal behavior. This is a very sad day for all Christians serving in the military.

Posted by Unknown at 8:17 AM 2 comments: Links to this post 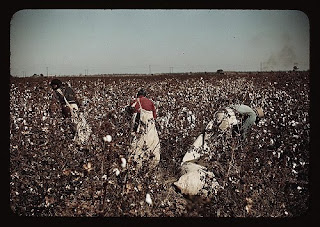 My father was in the Cotton business in the late 1940’s to early 1950's in Arkansas where he provided gangs of pickers to the farmers. The first order of business in hiring a gang of cotton pickers was to negotiate with the “Community Elder”, without whom you could not hire a single picker. After the negotiations were over, and the number pickers and cost per pound of cotton picked were settled on, my father would go around and pick up all the cotton pickers in a covered flat bed truck with benches on both sides and take them to the fields before daybreak, then drive them back home again in the evening. My father told me that most good pickers could earn enough money in the four months of cotton picking season that they did not have to work very much the rest of the year. It was hard work for sure, and nothing I would like to even attempt to do in order to put food on my family’s table. However, unknown to most people today, it paid good money for the 1950’s.

My father and I have a very close relationship that began when I was in diapers and (I am told) he would take me quail hunting on his shoulders. On one occasion my father, who is now 83 years old, and I were returning home from a deer hunting trip to Camden Alabama, where I spent many a weekend and holiday as a young boy following my father through the oak and pine wooded hills of Wilcox County. Being a little tired we stopped for gas and a cup of coffee at a filling station out by the Interstate highway in Evergreen Alabama. My father, who has never met a stranger, struck up a conversation with the store clerk, a black man, and somehow the clerk caught my father's last name and asked him if he ever lived in Arkansas. My father said, yes but that was back in the 1950's and we have now lived in Florida for the past 50 years. The man then smiled and said your Mr. Alford... the same Mr. Alford that used to come pick me and my brother up each morning to pick cotton.

As someone who grew up in the Old South where calling someone a “Cotton Picker” was a racial insult, I was not sure just where this conversation was headed. I needn’t have worried; for it was like both men had stepped back in time. These were two different men from two very different worlds, one black and one white, whose lives had intersected but briefly in the cotton fields of Arkansas many years ago… yet it became clear very quickly as they embraced that this brief intersection of two different worlds during the “Cotton Picking Days”, now long past, had left loving memories that both men cherished for a lifetime. They sat and talked like old friends for over half an hour, as I tried to absorb as much as I could.

As we were leaving, the clerk (I wish I knew this man’s name) embraced my father once more and ask him to stop by and see him again the next time we came that way. A few weeks later we stopped for gas and coffee on our way back from Camden again, but he no longer worked there and the new clerk did not know him. Over the years we stopped at the same filling station many times, but we never saw him again. Life is like that I suppose, our lives intersect but for a brief moment in time and then moves on.

I am reminded by this story that as I travel through this life of the importance to take time to make friends along the way. "A man of many companions may come to ruin, but there is a friend who sticks closer than a brother." (Proverbs 18:24 NIV)

Posted by Unknown at 8:53 AM 3 comments: Links to this post

The Christian Faith is a Journey… Not a Destination! 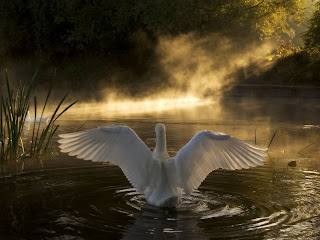 In so much of our religious vocabulary today we here people speak of their faith as if they had already arrived. They say things like; “I got saved back in 2001”, or “I became a Christian when I was in collage”, or “Pastor Jim came to my home and shared the plan of salvation with me and I accepted Christ as my Savior”. Now there is nothing wrong with any of these statements, but I want you to notice that they are all in the past tense.

The apostle Paul spoke of his faith much differently… in Philippians chapter 3 he writes;

“Not as though I had already attained, either were already perfect: but I follow after, if that I may apprehend that for which also I am apprehended of Christ Jesus. Brethren, I count not myself to have apprehended: but this one thing I do, forgetting those things which are behind, and reaching forth unto those things which are before, I press toward the mark for the prize of the high calling of God in Christ Jesus…”

“…Brethren, be followers together of (with) me”

It is important as we interact with one another in our daily lives, on Facebook, Tweeter, and the Blogs that we understand that we are “all” on a Journey of faith… And that we also make allowances for, and are patient with, those who are not where we are in our understanding of Scriptures and obedience thereunto. Maturity of faith is not a fruit that we ourselves can produce, but is instead a work of the Holy Spirit produced in us by the slow and patient process of conviction and learning to yield to His leading.

So let us learn to be patient, even longsuffering, with one another… For if the apostle Paul would say of himself; “Not as though I had already attained, either were already perfect” how much more must we say this of ourselves… and how much more must we give allowance unto others for their Journey. 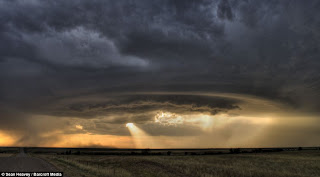 God is just AWESOME!!!
Click the link below to see more...
Jaw-dropping image of enormous 'supercell' cloud in Glasgow, Montana | Mail Online
Posted by Unknown at 6:34 AM No comments: Links to this post 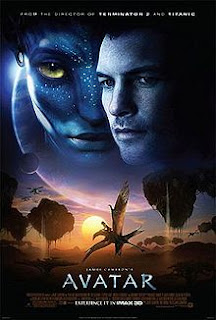 In the movie Avatar the blue natives of Pandora use the phrase "I see you" as a way of saying; "I see who you really are... behind the mask... beneath the surface... I see your heart!".

This is the way God sees us. He does not see the brave face we put on for the world, or the happy smile that hides our pain. He does not see the spotless image we put forth out of fear that we would be rejected if others knew the depths of our sins... No my friends, God sees us! Let that sink deep into your soul... ... ... God sees us, and the truly incredible part is that he loves us anyway, and he always will!

"Father, may I learn to see others like you see them... and love them like you love them! --- in Jesus name I pray, AMEN"

Posted by Unknown at 7:44 AM No comments: Links to this post