Are The Children of The Conservative Resurgence becoming "Moderates"? 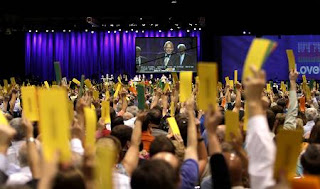 I think you are exactly right on this. Although maybe Legalism is a better word for what they are rejecting than Fundamentalism, although in recent times the meaning of the word Fundamentalism seems to have changed somewhat.

And I think it's not just Baptists who are changing. I think almost all of the stricter denominations are moving away from Legalism, some faster than others.

Perhaps “Legalism” is a better word… as both Liberals and Fundamentals can be “Legalistic”, however over very different doctrines.

Regardless, it is clear that the “Children of the Conservative Resurgence” are far more prone than the previous generations of Southern Baptist to be guided by the Scriptures in both their doctrine and orthopraxy, over and against being guided by the traditions of the Church (be they Liberal or Fundamental).

Greg:
Anybody in particular throwing around the "M" label?

Here is one of the articles I was reading when I wrote this article...