New Fix Proposed to Assuage Furor Over Textbook That Includes 36 Pages on Islam and 3 Paragraphs on Christianity | Video | TheBlaze.com 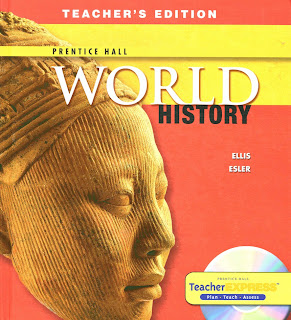 New Fix Proposed to Assuage Furor Over Textbook That Includes 36 Pages on Islam and 3 Paragraphs on Christianity | Video | TheBlaze.com:

The War on Christianity being waged by those who teach our children who, for economic reasons, are forced into public education continues unchecked and often even unknown!

Here is just one quote from the article above... "Students are prompted to read the Koran but not the Christian Bible."

Conservative commentator Todd Starnes has said the book refers to Muhammad, Islam’s most famed prophet, as a “messenger of God.”

Florida state Rep. Ritch Workman, a Republican, charged that the book has an overtly pro-Islam bias.
“It’s remarkably offensive to me,” he told WESH. “This book very much sugar coats the rise of Islam to be this wonderful new world order, while teaching that Christianity is dogmatic.”

What is remarkably offensive to me as a Christian is that "My Tax Dollars" are being used to promote Islam... and apparently my only recourse is to take my child out of the public schools and pay twice to educate them at home or in a private school.

Grace for the Journey,