Pelagian Beliefs in the SBC 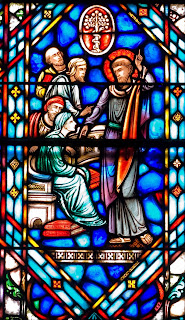 Recently I struck a “raw” nerve with Bart Barber, Tim Rogers, Wes Kenny, and Robin Foster over the issue of Pelagian beliefs in the SBC. I say that I struck a “raw” nerve with these guys because after posting a comment over on SBC Today saying that the “vast majority of Southern Baptist hold Pelagian beliefs of some sort or another…” Tim Rogers sent me an email to inform me that my comments were going to be “Censored” and Wes Kenny posted a comment on my Blog telling me that I was more than likely going to be banned from posting on SBC Today.

Now, I’m a big boy and I really don’t care if they ban me from posting on SBC Today or not, after all it is their blog and they can do as they please. However, I am a somewhat concerned by the extreme reaction of these Landmark guys over at SBC Today and I intend to post an article about that issue in the next few days. But really I am not all that concerned because neither of these guys are very influential in the SBC, nor is the Landmark movement they are a part of likely to gain many converts with these guys as the head of it’s PR department.

So, what is Pelagianism and is my comment that the “vast majority of Southern Baptist hold Pelagian beliefs of some sort or another…” true?

Pelagianism views humanity as basically good and morally unaffected by the Fall. It denies the imputation of Adam’s sin, original sin, total depravity, and substitutionary atonement. It simultaneously views man as fundamentally good and in possession of libertarian free will. With regards to salvation, it teaches that man has the ability in and of himself (apart from divine aid) to obey God and earn eternal salvation.

Pelagianism is overhwhelmingly incompatible with the Bible and was historically opposed by Augustine (354-430), Bishop of Hippo, leading to its condemnation as a heresy at Council of Carthage in 418 A.D. These condemnations were summarily ratified at the Council of Ephesus (A.D. 431).

Pelagius was a monk from Britain, whose reputation and theology came into prominence after he went to Rome sometime in the 380’s A.D. The historic Pelagian theological controversy involved the nature of man and the doctrine of original sin.

Pelagius believed that the consequences of Adam and Eve’s sin (the Fall) were restricted to themselves only; and thereby denied the belief that original sin was passed on (or transferred) to the children of Adam and thus to the human race. Adam’s sin merely “set a bad example” for his progeny and Jesus “set a good example” for mankind (thus counteracting Adam’s bad example). Pelagianism teaches that human beings are born in a state of innocence with a nature that is as pure as that which Adam was given at his creation.

As a result of his basic assumption, Pelagius taught that man has an unimpaired moral ability to choose that which is spiritually good and possesses the free will, ability, and capacity to do that which is spiritually good. This resulted in a gospel of salvation based on human works. Man could choose to follow the precepts of God and then follow those precepts because he had the power within himself to do so.

The controversy came to a head when Pelagian teaching came into contact with Augustine. Augustine did not deny that man had a will and that he could make choices. But, Augustine recognized that man did not have a free will in moral issues related to God, asserting that the effects original sin were passed to the children of Adam and Eve and that mankind’s nature was thereby corrupted. Man could choose what he desired, but those desires were influenced by his sinful nature and he was unable to refrain from sinning.

Pelagius cleared himself of charges, primarily by hiding his real beliefs; however, at the Council of Carthage in 418 A.D., his teachings were branded as heresy. The Council of Ephesus in 431 A.D., again condemned Pelagian doctrine and it was banished in the Greek portion of the church. However, in the West, the teachings held on, primarily in Britain and Gaul.

Pelagian teaching was replaced with Semi-Pelagianism which sought a middle ground between Pelagianism and Augustinianism, but it too was condemned at the Second Synod of Orange in 529 A.D. However, elements of Semi-Pelagianism continued in the Western (Roman) church. It emerged again after the Reformation in modified form in Arminianism which was rejected by the Reformed churches at the Synod of Dort in 1618-1619

That the vast majority of Southern Baptists hold to Pelagian beliefs of some sort or another is without question. Regardless of how embarrassed and uncomfortable some of my Landmark friends might be over my stating this publicly, it is nevertheless absolutely the truth as the above definition of Pelagianism makes it all to plain to see.

Here are the major areas of agreement between what Pelagian taught and what most Southern Baptist believe today:

Most Southern Baptist view humanity (human nature) as basically good - This can be seen in that the majority of Southern Baptist believe that the “Will” of man is absolutely free to choose what is good or what is evil. And while most would not deny that there are evil people in the world, most would attribute their being evil people in the world due to the evil choices they have made, and not because they are by nature corrupt.

Most Southern Baptist deny the imputation of Adam’s sin – This can be seen in that most Southern Baptist believe that children are born in a state of innocence, just as Pelagian taught, and only become guilty before God after they commit actual sin. Pelagianism is the ideology behind the so called “Age of Accountability” which most Southern Baptists have adopted in order to explain how children dying before they make a profession of faith can go to heaven.

I am sure that better theologians than I can give a far more complete list of shared beliefs between Pelagian and the majority of Southern Baptist today, however I believe I have effectively proven my point.

Now, the question is; “why are my Landmark friends so embarrassed by me stating this truth in public?” I think I understand why, but what do you think is the reason for their obvious embarrassment?

Now you've done it. This should be interesting.

Unknown said...
This comment has been removed by the author.
7:36 PM

I really hate to admit it… but, these Landmark guys are really good at “spinning” the facts. However, I don’t think they are going to have much luck with this one.

Being someone who does not hold to the two Pelagian beliefs you enumerated, and yet is also a non-Calvinist Southern Baptist, I simply ask:

How many is a "vast majority"? Would you like to venture a more numerical estimate?

You are correct to point out that you don’t have to be a Calvinist to reject these Pelagian beliefs… Augustine rejected Pelagianism and no one ever called him a Calvinist. :-)

I do not have “any” statistical information to “prove” my use of the phrase “vast majority”. It would be interesting if LifeWay would do a survey concerning these two beliefs. However, I am thinking of the person in the pew and not just pastors when I say the vast majority of Southern Baptist believe these things, so they would need to actually do two surveys, one for pastors, and one for laymen, in order to clearly understand the exact numbers.

Statistical information not with standing, these beliefs are however widely held in the Southern Baptist Convention.

Andrew, you say you do not believe them, which is good, but what is your opinion about how widely they are held among the average Southern Baptist?

I agree that a survey on this would be enlightening (and as you say, possibly frightening).

My opinion (also without data and merely anecdotal)

On the first count, I would say that most Southern Baptists hold a modified version of this. They don't think people are basically good, but they do think that we all have the ability to choose/consider the gospel and its implications (I understand how one theologically must follow the other, but most pew-sitters are not logical in their theology)

On the second count, they are non-
Pelagian (holding to original sin) but still a split decision concerning the implications. Some of my friends hold that without a profession, you go to hell...even infants and invalids. Others hold to a "God saves all babies" view, implicitly requiring an alternate salvation or second purpose for Christ's death.

In conclusion, I predict that pew-sitters and pastors will most likely differ on these two points, especially if asked their practical outworkings, like "Do babies go to heaven?"

I think your comments and understanding of this issue in the SBC are “Spot On” as our British friends say.

Greg. this is a good place to start the survey. It is a concise statement of Pelagian beliefs.
1. That Adam would have died even if he had not sin;
2. That the sin of Adam injured himself alone, not the human race;
3. That newborn children are in the same condition as Adam was before the Fall; corollary; that infants, though unbaptized, have eternal life;
4. That the whole human race does not die because of Adam's death or sin, nor will it rise again because of Christ's resurrection;
5. That the Old Testament Law, as well as the New Testament Gospel, gives entrance to heaven; and
6. That even before the coming of Christ there were men who were entirely without sin.

I have contended for a long time that the controversy in the convention is not between Calvinism and Arminianism ( which affirmed in article three the necessity of the new birth before saving faith can be exercised) but between Calvinism and Pelagianism. As such there can be no bridges built, but we must do as our forefathers did , condemn the heresies and show the truth by our action.
By His grace alone, Cap

It is good to hear from you my old friend… I hope all is well with you?

I agree that the real issue in the convention is with the widespread acceptance of Pelagian doctrine/ideas. And yes, it is past time that we start sounding the alarm… if good people go to heaven (without being born again), then why does anyone need the church?

hope you don't mind if I referenced your blog this morning.

Busted out laughing when I read this statement:

"...nor is the Landmark movement they are a part of likely to gain many converts with these guys as the head of it’s PR department.

The aggressive and combative spirit embodied in this movement is not what the younger generation is looking for... that is one of the reasons why they do not attend business meeting, local association meeting, or the national convention... and that is why this “fringe” movement will never gain more than a handful of followers in the SBC.