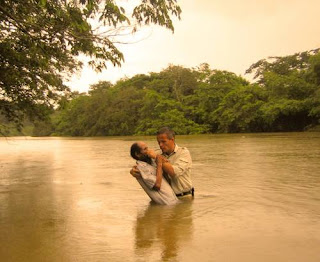 For many in the SBC the phrase “Missionary Calvinism” is considered to be an oxymoron and dismissed offhand as pure rubbish. However, the historical fact that Calvinism can lead, and indeed has lead, many young men and women throughout history to become not only Missionaries and Church Planter, but to become “Passionate” Missionaries and Church Planters is undeniable. Yet, for many who grew up in the SBC, having been exposed from the cradle to the rhetoric of such notable SBC Anti-Calvinist as Jerry Vines, this truth seams to catch them of guard.

Still, the fact remains that not only did Calvin preach evangelism his Church in Geneva became a hub for mission activity under his leadership, as can be seen in Ray Van Neste article in the Founders Journal titled: “John Calvin on Evangelism and Missions” and an article by “The Thirsty Theologian” (you just got to love his Blog name) titled: “Calvin the Evangelist”.

Any discussion of “Missionary Calvinism” would be incomplete with mentioning such Calvinist missionary giants such as: George Whitfield, Charles H. Spurgeon, David Brainerd, Jonathan Edwards, Adoniram Judson, Luther Rice, Lottie Moon, Andrew Fuller, and the father of modern missions; William Carey. Yet, sadly we find that the vast majority of Southern Baptist do not even know that these great missionary men and women were even Calvinist.

Turning toward the New Calvinist of today one would almost need to have their head in the sand not to know that Calvinism has caught fire among the current generation of evangelicals, including Baptist. In an article “Even at 500, Calvin isn’t slowing down” posted on “The Pew Forum on Religion & Public Life” Daniel Burke writes:

"His theology is the hottest, most explosive thing being discussed right now," said Justin Taylor, 32, a self-described Calvinist, and an editorial director at Crossway, a Christian publisher in the evangelical heartland of Wheaton, Ill. "What he taught is extraordinarily influential right now."

Young evangelicals are scooping up books by neo-Calvinist authors, packing churches and conventions led by Calvinist preachers and studying at staunchly Calvinist seminaries. They're blogging their way through Calvin's behemoth "Institutes of the Christian Religion," setting up Facebook fan clubs and opening Twitter feeds.

Many proudly bare their fidelity to Calvinism's "five points" of predestination as if they were stars on a general's chest. Earlier this year, Time magazine served notice that "The New Calvinism" is one of "10 ideas that are changing the world right now."

In other words, Calvinism has moved out of the Puritan meetinghouse and into the megachurch.

The rise of this new “Passionate Missionary Calvinism” in the SBC is perhaps best on display at The Southern Baptist Theological Seminary where, under the direction of her president, Dr. R. Albert Mohler Jr., himself a devout Calvinist, we witnessed the establishment of “The Billy Graham School of Missions, Evangelism and Church Growth”. If you are still not convinced that this new generation of Calvinist in the SBC are genuine in their passion for missions and evangelism I invite you to go to their website and spend some time reading some of their comments and discovering first hand their heart.
The old, stale, and warn out accusations of the Anti-Calvinist that claim Calvinism kills evangelism and missions have, by the actions of this new generation of Passionate Missionary Calvinist, been proven a lie… and with each graduating class from The Billy Graham School of Missions, Evangelism and Church Growth that head out into the world to do missions work, those in the SBC who continue say Calvinism kills evangelism and mission only succeed in destroying their own integrity and reputation.
Grace Always,
Posted by Unknown at 5:29 AM

Amen, Brother Greg.
Election encourages evangelism, for I can preach, knowing God's sheep will hear and come in. It is in fact the only ground of encouragement to preah, teach and witness.

Yes, the doctrine of election informes me that God does have some lost sheep out there, if only I will go and find them.

Now if I must try somehow to turn a goat into a sheep in order to bring him into the kingdom then I fear that I shall never have success.

Don't spend too much time playing around on that computer today, you programmer, you.

Gotta balance that time between being a Programmer and Professional Commenter at the Burleson Blog.

Yes, being a Computer Programmer does get in the way of my blogging sometimes, but I try and keep it to a minimum. I wonder does your being “the real Historian” of the SBC every get in your way of blogging?

I’m not sure what you are driving at about me being a “Professional Commentator” at the Burleson Blog… However, if you think for a moment that I would be somewhat hesitant to be associated with Wade Burleson, then you are sadly wrong. I do not personally know Wade Burleson, but I am very grateful for the work Wade has done in the SBC and for the stand he took with the radical Fundamentalists/Landmarkers that have covertly taken over the BOT at the IMB.

See… it really doesn’t take that much to get me going… :-)

Thanks for dropping by…

This “Resurgence” of Passionate Missionary Calvinism is thrilling to my soul… to think that I might actually be living in the first movement of the 3rd Great Awakening is very wonderful to my soul.

What this means is that we are seeing a “huge spike” in the number of Young Calvinist who are responding to the call to become Pastors, Missionaries, and New Church Planters.

Whitefield would be very pleased!

once a goat always a goat; once a sheep always a sheep.

My wife says I’m an “Old Goat”, but then I don’t think that is what you are referring to…

Interestingly, I addressed this in a sermon on Acts. 9:1-9 this last Sunday morning where I ask the congregation; “What was Saul, the vicious persecutor of Christians, before his encounter with the Lord Jesus Christ on the Damascus road?”

FROM THE ANSWER YOU RECEIVED, IT LOOKS LIKE YOUR FLOCK IS GRASPING THE TRUTH OF GOD'S ELECTION.

BUT I KNOW A CHURCH WHERE THE PASTOR PREACHED GRACE FOR 30 YEARS, AFTER HE DIED, THEY PUT A RANK ARMIMIAN IN. PEOPLE ARE FICKLE. PUT ALL YOUR TRUST IN THE LORD.
BRO. PAUL

Marvin Merriweather said...
This comment has been removed by a blog administrator.
1:08 PM

Just want to clear up some confusion here as someone named Marvin has apparently been posting while using my URL. I want to make it known that the blog his name is linked to is not his site (it's mine). Also, I want to make it clear that I do not know who he is, nor did I give him permission to use my URL in his name.

I would ask you kindly to no longer use my URL as it is causing confusion and people are falsely attributing your comments to me. Thank you.

Sorry about the confusion Brother...